Title: Hitchhikers Guide to the Galaxy 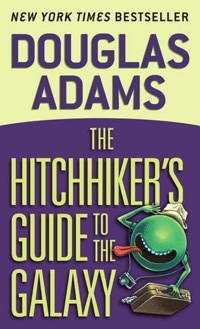 Well… it will take me sometime to re-gather my thoughts after they were cast adrift and floated off into the Galaxy. Even though I get the impression you "FLOAT" through space, this book moves faster than the speed of light, my mind turned to mush as it darted quickly from scene to scene. According to my Kobo I was only reading 8 pages per sitting, which is not enough for the story to sink in, but just enough for another barrage of words and time continuum and weird looking alien like creatures to force there way into the whirring cesspool of my now numb mind.

Along my journey into deep space we encountered 2 headed men, depressed robotic computers and 2 white mice that flew in glass tumblers. See are you understanding why my mind feels cast adrift and still quite possibly lost in space?

No? Well how's this, a spaceship that works on improbability - yeah. Don't understand the rules of improbability? Don't even try and get it. Just roll with it and realise that sometimes "forty-four thousand, five hundred and twenty five to one against" is quite possibly damn good improbability odds. Those odds all sorts of things are possible. And improbable.

Honestly I can't say. I don't read reviews of books until AFTER I have read them (and am much the same with my Movie viewing) I like to form my own opinion first. After I know how I feel, then I will start reading what others thought. Thing is with THIS book I can't decide if I love it or not. If anything I can go by what most people have said about it "you either put it down when your head starts to whirl or you go with the whirl and read till the end"

And I read it till the end. I NEVER finish books that don't grab me in just a little.

So I think it's safe to say I LIKED this book. I just didn't LOVE it.

I am not usually a sci-fiction reader nor watcher (I have watched Back to the Future trilogy with hubby but not without asking a million questions of what year we are in. I've also done Star Wars double trilogy but again question after question reign nigh) so while I do appreciate the weird and crazy, I guess I'm just not that nerdy. Most of the jokes in the book went over my head as I waded through words that I found hard to pronounce (am I the only one who hates reading a book that has hard to pronounce names… Hermione (hermy-own-knee) until the movie cleared that up (her-my-knee) just about did my head in for the first half of Harry Potter!! ) and I do struggle when books jump from one place to another, but I suppose with space travel it's to be expected that the book jumped about crazily.

Now one more small thing I will add; as this was my first time to read this book - I found it so unbelievably ahead of it's time. Written in 1979(?) the description of what the Hitchhikers Guide to the Galaxy (the hitchhikers guide book) were to me; reading this as an ebook version; eerily similar and just plain spinny. Who'da thunk it way back in the 70's that one day this device he described in great detail would be sort of similar to the modern day (2012) ebook is (storage of 1000 books on one teeny tiny screen) Okay so maybe it's not that eerie to you, but reading it as an ebook device and trying to imagine what he wrote while I'm reading it on a device that reminds me of what he's describing. Okay so yes it spun me out vastly!

Email ThisBlogThis!Share to TwitterShare to FacebookShare to Pinterest
Labels: Reading

You are overthinking it ;) but yes, the HHG2G as compared to smartphones/iPads/kindles etc is spooky!