When a therapist suggests DATE NIGHTS; I'm no so sure she had this in mind!

Last night my husband and I went to the first of the concerts for 2013.

Yes the FIRST because somehow ALL the best bands are touring in Australia THIS YEAR! With hubbies 40th next month we have splurged a little on upcoming bands by year end, he will  have been to FIVE concerts! FIVE! Crazy huh? I will have only gone to three ;) 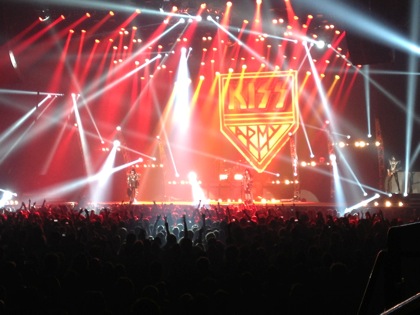 Of course we had to start the Year of the Concert with the very best! Joining a squillion other devoted fans, the KISS Army converged on the Entertainment Centre to see FOUR bands line up. Demolition Diva, Thin Lizzy, Motley Crue and KISS. Heavy rocking & bloody LOUD music from 5:30 till 11pm! OUCH!

With ringing ears, raccoon eyes (I missed some of that mascara) and utterly exhausted after a measly 5 hours sleep {most of which was spent in a restless; half awake, half asleep dream state} today I am strangely peaceful. Quite honestly I could curl up and sleep for the next four hours and sadly I've already used up my quota of coffee for the day!

This was my third KISS concert and I wasn't disappointed! A little sad they didn't play a couple of their more popular hits, it was still an awesome show and I HIGHLY recommend anyone go see it! It would be so worth the money just to see the crowd put on a show before the show. There are guys who dress up in the FULL KISS getup. I'm talking makeup, scantily clad chests, skinny leather pants, TALL boots and big hair. I've not seen so much BIG hair since the 80's - seriously! And here I was worrying about wearing too much makeup (I don't normally wear any!)

The hubby and I haven't had a night out in a long time, so it was good to go and re-live our youthful years ;) and though we felt like falling asleep before the almighty deafening drum kit of Tommy Lee put paid to that idea as it reverberated through the arms of our chairs and under our backsides; it was good to just get out and BE.

The only downside to the night was leaving the venue at 11:15, we didn't make it to the motorway until 10 to 12! 35 mins to get from the carpark to the motorway which is literally ONE roundabout back from it. Typical entertainment centre parking at its best.

Now though is high time to bank some sleep before the next concert in a few short weeks.

{the whole point of this post was to get me writing again. Not to write a review on the concert. I've just been missing this space in recent months!}

Great date night Car (and great to see you again!) - SD and I went to see the Kaiser Chiefs a couple of weeks back - what a night!

We were supposed to be seeing the Stranglers the weekend after next but unfortunately somethings come up :(

I would SO love to see Thin Lizzy and Kiss - very envious!