Earlier in the week it was suggested, albeit flippantly, that perhaps another sibling would help to change a certain character trait of my girl.

The character trait in question - not such a big deal.

The flippant comment, one that is thrown about far too often without knowing individual history and while I could have said "but… we haven't had any more children because of X, Y, Z" I chose in this instance to stay in silence, barely nodding along with it. Inside a ball of knotted emotions swirled. Outwardly I was cool, calm and relaxed.

How far I've come these past few years.

As we walked back to the car, my daughter having heard the comment and of course the thought of a new baby to play with being fresh on her mind (what with my SIL only recently giving birth to her second) pipes up "I really, really want a baby sister. Or brother"

Of course. My heart shatters a little more.

What do I say to my 6yo? The reasons so intricate, so many factors within this difficult decision that its not so cut and dried. At the tender age of 6, where she still dreams of growing up and getting married (preferably to a prince) and having herself 2 little girls is such a ginormous and beautiful fantasy. I can't go destroying those dreams by saying sometimes people can't have babies. She's only a baby herself.

When she sees little cousins becoming big sisters, she looks at me sadly and asks why?

I struggled (yet again) to draw the line between my own heart ache and happily draw a bright picture of hope for my girl, all the while my husband muttering away in the background "there's always something that pushes you over the edge" and its true. So true.

Sometimes it is the very smallest of things that set me off. While I can sit and say I have come so far to get where I am today, both mentally and emotionally (heck I didn't even shed ONE tear when the recent influx of babies arrived… for anyone who has dealt with one iota of infertility will know THAT in itself is HUGE.) I've spent the past few days pondering on how it has made me feel and how I want it to make me feel, because deep down this won't be the last time I am questioned. It seems to be a given that the natural order in life is to grow up, get married, have a baby then have AT LEAST one if not two more babies.

The past few days rather than focus on the negatives of it all, I wracked my brain to find ONE awesome reason that makes being a family of three a good and positive thing. 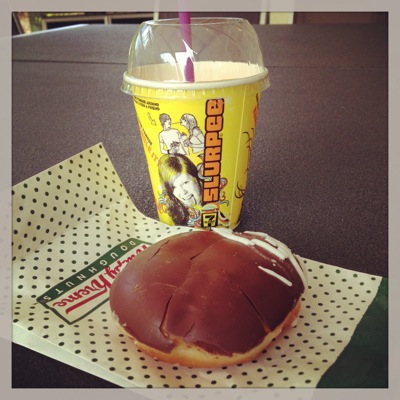 Its cheaper to buy Krispy Kreme Donuts in packs of 4. One for Hubby. One for Child. Two for sad heartbroken mumma. Didn't ya know - donuts fix EVERYTHING!

Hello my lovely! People can be so self involved that they no not what they say and how it can affect people. They don't know the story that makes you you! Therefore shouldn't have an opinion, especially how you raise your daughter! You truly are blessed to have such a beautiful family no matter what the size... Eat your yummies and then focus on the fabulous-ness that makes up YOUR family!!!!!