This CRAZY idea of mine to attempt NaNo again means I have been forced to re-think my approach to it. The first time I approached it I really had no idea!
No idea how to write properly
No idea that writing was more than plucking a few words from your head
No idea about characterisation and scenes and settings.

I hit that first month with no background, no planning – just a seed of an idea.

I just wrote. And wrote. And wrote some more. Which is why I find myself staring in dismay at a 3/4 finished manuscript of 68,592 words and having NO real clue on how to approach it or how to finalise my scenes. I am however confident that I can structurally edit like a fiend & I look forward to that - when the time comes. A blog buddy suggested recently to put some distance between myself and the manuscript and she was 100% correct in her suggestion – I have placed it in the top drawer until I can come back to it refreshed and ready to add the remaining words. Ultimately I’d love to aim at writing between 100,000 – 120,000 words, but before I can tackle the remaining chapter I need to plot the direction and somehow make sense of, and tidy up the last 25,000 words that feel muddled. Last month showed me that I am still in a grief-holding-pattern and that until I can overcome that stage, my story WON’T be as good as it can be.

It is for this reason I LOVE the idea of NaNo – to sit and write a straight 50K without losing steam – means that the story will hopefully gain pace and direction as the words flow across the screen. And provided I don’t lose my momentum during the month.

My previous attempt at novel writing - (ie attempting NaNo then Camp NaNo) gave me a good solid base and allowed me to delve into my characters minds. However the writing I’ve done since then (ie writing in stilted stints here and there) meant that I’ve managed to only achieve pages of disjointed sections that need a magical touch.

This year I’ve decided to start with a fresh new story that has been on the backburner for a couple of years. I’m older (MUCH older), wiser (as wise as an owl) and smarter (hello Diploma of Professional Writing) and I’m desperately hoping that these attributes will add layers to my approach and thus pave the way to a clearer direction. If all else fails this will be an exercise in establishing a routine and seeing if I do have what it takes to be a full time writer.

Every day for the past two weeks I have taken the Writers Workbook (Ready, Set, Novel) with me in my hand bag and armed with a rainbow of colours and washi tape I’ve been jotting down notes during spare minutes of the day. The ideas have been flowing fast and furious – usually while I’m driving! 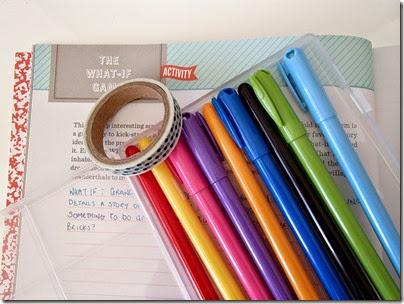 This time I have stocked up on Index Cards so I can plot the scenes as I write them. 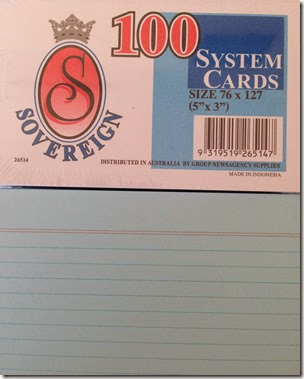 Such is the seriousness of this task and the want – no the NEED – to succeed; I have taken it one step further and sketched up a tentative daily timetable trying to utilise my days in order to keep up with everything else that life throws at me. Once I re-do it and make it pretty I will have to remember to share it! I am currently spending a full hour writing each day and I am churning out between 800 – 1,000 words. Which meant I’ve had to find an extra hour each day to write. I think its doable – but I will only know when November hits & hope like crazy my health behaves itself! 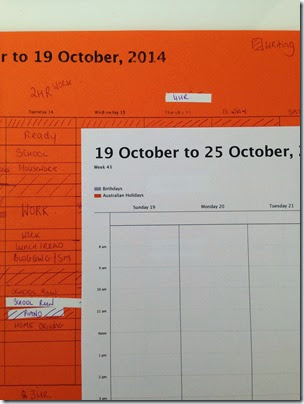 What about YOU? Are you writing and thinking of attempting NaNoWriMo this year? If you are – what are you doing to prepare.