Today I am feeling weary.
Not bone crunchingly exhausted.
Not even just a little bit tired.
I am WEARY.

Of course it has nothing and everything to do with the fact we were out partying head-banging until the wee small hours of the morning. Along with 45,000 others, buried in a sea of black complete with flashing red horns we rocked and are now a little deafer than we were after their LAST concert.

I stare around me at the crowd as more an more grey hairs sprout (& I'm not just talking about the band here) a few more bald heads, but in between all that there are small children; being shaped & moulded to become the next gen of hard core rockers. My own daughter (8yo) was absolutely devastated when I told her the 3rd ticket was for her uncle & after citing her far too young age and the deafening noise of the concert she finally understood why I said no.

Until her classmate was allowed to go and bang heads with the best of them.

Some days I wonder if we are getting too old for this. The fatigue we feel the following day, the ringing ears (did you say something?) and the raccoon eyes because removing mascara after midnight is the worst job in the world.

Lets not forget STANDING on a bus for over an HOUR to get from one side of town to the stadium! Feeling extreme gratitude toward uncomfortable grandstand seats and am now considering buying a pair of doc martins for the next concert - what on earth was I thinking wearing HEELS?

Yet despite it all and despite the fact I am only managing to function today with the help of copious amounts of chocolate and back to back caffeine infusions; we have already said "Next time we go"

What can I say we like to plan ahead... 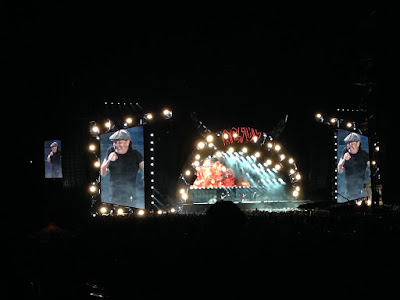 Keep rocking Car and buy those DM's (heels at a concert - what WERE you thinking!). We saw Madness back in the Summer and PiL a month or so ago and there were plenty of bald/grey haired rockers there too - it's quite a shock when you look around and realise that this is your peer group! Managed to get tickets to see Adam Ant next year, now that's really going to be something! A day or two of feeling like crap is a small price to pay :-)