Last week I stated my intentions of contemplating NaNoWriMo (again) if you have a little look over there ---------> you might see that I have been writing. 7,398 words (handwritten then retyped) as I started out with starry eyes. And my sanity. 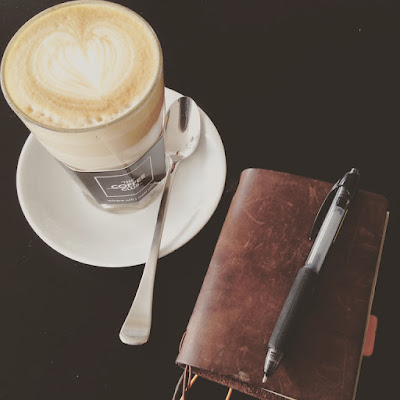 Day 1 - armed with notebook, favourite writing pen and coffee I began writing. The finishing touches (all 2,895 words) to a short story I began several months ago. A ghostly / supernatural themed story that *I think* turned out quite good, however the initial gem of an idea was found on twitter and as such I can never do anything with it.

That night, tired but happy to make a decent start, I began perusing the stack of library books I thought may come in handy during the month... 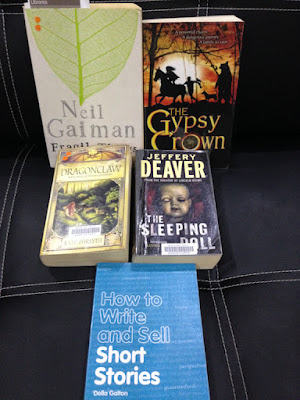 Day 2 dawned brightly and I selected an inspiration picture from Pinterest and I sat down. No matter how hard I tried I felt I was going in circles. And it was then I realised that trying to come up with a different short story outline every 2nd or 3rd day would ensue complete and utter burn out.

You heard it hear folks... writing 50K words on ONE story is far easier than over many short stories.

Day 3 and I returned to my original NaNo story from last year. I wrote 50K and managed to tell my story to the crucial change over point at which stage I suddenly found myself thrust into a world I created but with no idea how my plot would play out and zero experience writing fantasy.

WHAT WAS I THINKING?

On day 3 I did manage to write quota but then I missed Day 4 and yesterday I ignored the world and attempted to get my word count to where it needed to be.

Until I was hit by the procrastination bug. 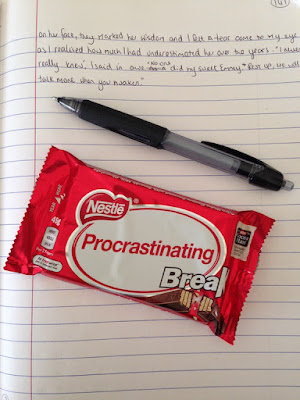 Listen when your chocolate bar tells you to take a break and procrastinate... you better bloody well do as the chocolate says. It is all knowing!

So I took a break, thankfully while I was on that break I spent my time wisely and I plotted out several missing points on my story and I now have a vague outline of how the plot will flow as well as the themes. Now the hard part is just to nut out how I get my characters to that point.

This morning I woke up late, I had two showers (the first cut short when I realised the new puppy was eating the pillow on the bed. the second was to wash out my conditioner!) We were late to School and I came home exhausted. At 9am.

I started thinking WHY am I doing this to myself. It is obvious by now that I am *not* in the correct mindset to be writing about fictional characters when I cannot keep the real life people in check. I considered briefly while I spent 2 hours fluffing about on the internet looking at nothing, to throw it all in. Treat it like a bad joke and pretend 2015 didn't happen.

Yet after writing this post... and staring at my NaNo book with only 50pages until I fill it completely and seeing my word count wavering so close to the 10K (that is 1/5th of the way through) I think maybe I should pull up my big girl panties and just get on with the job.

So while I sit here and eat my "procrastinating chocolate" that apparently was missed being eaten yesterday because I was too busy procrastinating I will ponder whether I will go on with my story or if I shall just aim to write a little bit every day rather than a big chunk and burning myself out.

Are you NaNo'ing this year? Do you feel the burnout so early on?