I am a creative soul. I am always doing something and I am never whole within myself if I leave the house without a small bag of creative things. Be that a journal and pens. Watercolours and washi tape. A crochet project or three. A knitted something.

During 2015 my creativity fell apart at the seams. I wanted to be creative but my creative persona was hiding behind all that befell me. I yearned to do something, I searched myriad blogs, saved hundreds of pinterest photos for inspiration and I doggedly continued to write my way through my blocks.

My creative writing words and stories lay beneath my foundations, every now and again a character would pop up and I would struggle to write a single page. Words refusing to flow. Again I would take to my journal and lament.

I yearned to paint art journal pages but each one became a layer of meh. Then I took up painting at an easel - like a real artist… what was I thinking? Thinking I would return to a raw art form and be able to suddenly churn out all these soul paintings depicting all that I felt was missing within. Instead I managed a mishmash of colours on pages. Blurring together until all you could see was murky quagmire of paint. Don't believe me.... oh honey you better believe it! 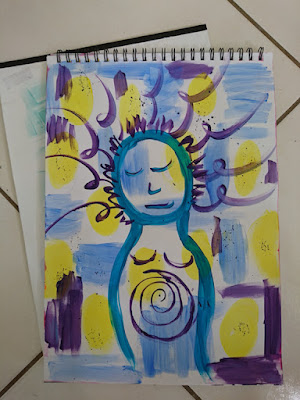 I carried a set of watercolours with me everywhere and each Wednesday I would pull them out and attempt to yield them across the page and even with my daughters art teacher tracking my dismal progress something was lacking.

I wrote and wrote.

Then wrote some more.

There were failed attempts at crochet projects - frogged (I NEVER frog!) and re-stashed.

I even started writing a memoir style book that ended in a series of anger fuelled words that left me sinking into a funk as suddenly everything became crystal clear and things started making sense.

It wasn’t until this year that I realized – you cannot force creativity. My entire creative self in 2015 was poured into my four little midori journals. Over 60,000 words. They were the whole of my creative side. 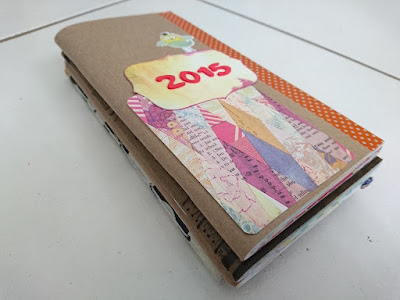 They may be slim and thin, but the words within are many and packed a punch.

And of course I prettified the edges. 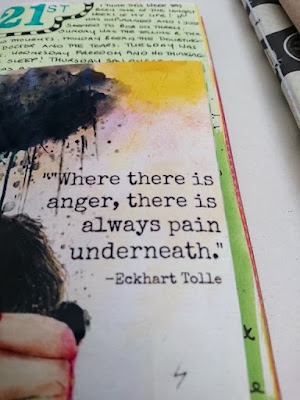 Inside there are quotes printed from Pinterest, words and always some type of doodling and lots of colour.

As always the words were with me. They may not have been the words I craved to write and continue the story of Jack and Emmy. Even my blog posts suffered as I spiralled. In the end it was the blank spaces between the spirals that I found myself exactly where I needed to be in 2015. Creatively wise.
Posted by Car at 2:34 PM