** Warning **
If you are in the least bit squirmy, DO NOT scroll down I have added some squirmy pictures of my insides ~ these are NOT for the feint hearted!!!

Today was my first appointment with my new surgeon Dr W! Top surgeon, comes top dollar... 320 bucks later ~ could be the most expensive hour of my life!
I had some trepidation as this was the first MALE GYNO I've been to (all doctors in the past, except one male sonographer, have been female) & when it comes to examining 'those' areas ~ I've always felt more comfortable with females, so I was pleasantly surprised to find it wasn't that bad & if I'm being totally honest it hurt less than when both my GP and Dr K had examined me for this lump.

Firstly we had a quick run through of my history, anyone who has traipsed down the fertility path will know that when you mention history it isn't a simple 'when did you start your period' you pretty much have to go through the whole kit and kaboodle.
After checking out the pictures taken during my laparoscopy (see below for a cool inside my uterus shot of the lump) I then had an internal examination followed by a date with what is better known in TTC circles as the Dildo Cam (aka the skinny internal ultrasound stick thingy) it was time to talk plan of attack.

Basically in a nutshell, I have a 2cm nodule of endometrial something or rather that has grown into the back of my vagina (better known as my hoo-haa... because the real word makes me sound so old! ;) this nodule has been growing for some time behind my cervix, but is cushioned between the cervix and the bowel. Thankfully it has not grown into the bowel & there is enough room behind it to get the scope in for a better look. This is good because had it been near (or in) the bowel it would have resulted in bowel-resections and needing bowel surgeons on hand (etc) HOWEVER even though it is not situated in the bowel, it is still classed as level 4-5 endometriosis (albeit on the milder end... yay?) but still comes with a HEFTY price tag for surgical removal!

The best news of the day IT IS NOT cancerous. Therefore it is not life threatening and will be classed as elective surgery, though I feel this really shouldn't be categorised as such. Yes it is elective. It is MY choice to have the darn thing taken out, but truly how can they class this as elective when Endo is a down right debilitating disease & affects woman on so many different levels with differing pain thresholds. Perhaps if there was more awareness raised of this blasted disease & how it affects the everyday lives of woman - this surgery would become essential rather than elective.
Feel free to correct me if I'm wrong, but if you break your foot and need surgery... this would be essential right? New Boobies - definitely elective? Facelife - elective. Endo removal - FUCKING ESSENTIAL!

I do have another option (which I think was only if I decided to defer surgery until a much later date) and that is to go on menopause medication... this means tricking my body into false menopause to suppress any further growth, but the thought of hot flushes (which I endured during my 5 day stint on clomid and were horrible) I quickly turned down this option

I'm sure he offered a third option, but for the life of me I cannot remember what that was.

So we are going with Option 3 which he agreed would be best and that is to have an 'elective' surgery to remove it. This op will be 2 - 2½ hours in duration where he will slice and dice the endo and scar tissue that has grown on the walls of my uterus. He will then work his way down toward the lump and start to remove it from the top down. There is a possibility that he may need to cut into my cervix to get to the lump as well as the vagina and a very slim possibility he may need to shave a bit off the side of my bowel (don't you just love surgeon speak!) I will end up with a 2cm scar in the top of my hoo-haa that will take a while to heal, but will eventually go back to normal. There is absolutely NO guarantee that my endo pain will dissapear (this I know all too well after my big op in '05, I actually had worse painful periods afterward)
This op will require at least 2 nights in hospital & at least 3 weeks off work to recover. Writing it down like this, makes me realise that this is not going to be a walk in the park & I feel like screaming and ranting and raving - Why me? Why do others who also have this disease NOT have to endure endless ops & get to have multiple kids? What did I do to deserve this crap. I too wanted a BIG family (& yes I know my DH factors into that decision NOT to have more children - long story... I'll get to that eventually) but for now I am a truly peeved at the world and am all about ~ woe is me :(

Bearing in mind that I was planning on leaving work at the end of June, my mind is now in turmoil of whether to wait until I leave & have the operation then, or bring it forward and let work deal with me leaving earlier than originally suggested. I am opting toward leaving earlier option & seriously I am so stressed about all this now, adding another month 'just for work' doesn't play into the equation for em at this stage of the game. I'm thinking end of May for the operation? That way it's not too soon, not too far away and I'm not letting work down and then I can have my time to recoup at home without stresses of work weighing me down.

As for for what happens post op is anyone's guess. I have been given the suggestions of the pill and or mirena both of which would be continuous to stop my periods, hence not giving this disease an option to grow back. I am worried about putting more drugs into my body, but I can't see any other option for us. He did not suggest any further treatment on the subject of babies post op (though I'm not entirely surprised as mainly I was there for the endo side, not the fertility side) I get the feeling that he is off the thought process that clearing the endo is the only thing stopping me from getting pregnant and once it's gone my window of opportunity will re-open YK? Except all that does is throw me back into the waiting game because let's face it sitting around waiting and doing nothing is NOT getting me pregnant. It didn't in the past and I daresay it won't in the future. Anyhow I must not think of that side of things, for us it's not an option and is a no-go zone in our relationship and if I'm being totally honest with myself I don't want to give this disease any option to re-grow and if that means there will be no more babies in my future than I'm just going to have to get my head around it.

I apologise that this post is all over the shop - my head is just that at the moment and while I'm on the verge of tears and probably a major breakdown I'm undecided on which part makes me want to curl up into a little ball and sob my eyes out. Until I can compartmentalise all this in my head, please just bare with me. (I might even come back and re-write it or at least re-hash it in another blog entry)

& here's the promised pictures! This is a cross hatch of a womans insides, I've circled and shown exactly where my lump is growing (I must say it was pretty cool to see this today on an anatomy model) 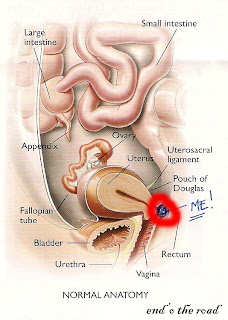 And this disgusting picture is of my insides. The circle is showing the back end of the lump (this view is from my uterus looking down) pretty gross, yet eerily cool huh? 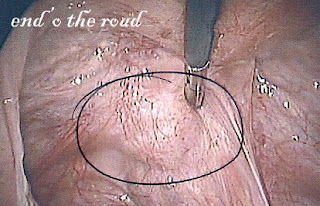 Good luck with your surgery and your condition. For what it is worth, I think there are many undiagnosed conditions in both male, female and transgender individuals. You can go to your GP for years telling them the same old story about discomfort and disability and the responses is exceptionally unhelpful in my opinion. It would be helpful if people were given full CT Scans at various times in their lifespan. This would more clearly identify where problems and physical changes have occurred, and therefore more obvious if they require surgery. In my opinion it is ridiculous that you should have to pay for your surgery. You have pain and discomfort you want relief from it. It is internal and not aesthetic in any way. Good luck and I hope it is successful for you.