This blog feels like it is finally becoming more in tune as a writing blog and while it will still feature my life (and that associated crap) well into the future, I am feeling really good about this change of direction - it must mean I am doing something right in terms of development both mentally and physically!

Yesterday I wrote a piece for WOW (Write on Wednesday) which you can read here, and while I mentioned briefly that it was a story that had been breathing down my neck for some years, I have sadly neglected it in the past few years as the main character has since passed. I always told her I'd like to tell her story and she would often tell me I was crazy and why would anyone want to read a bunch of boring stuff like that anyhow? Personally I think she was the crazy one, because this story has always been really intriguing for me and the incredible strength she must have endured when most of us take things for granted was admirable in the least, you would have to be crazy not to see the story in that! My only problem with this story is I only have the bare outline which means that with the main character now gone, there will be parts that will need to be fictional. This is the part where I'm unsure the direction I should take because it's a true story, but I will need to make up parts. Anyhow - enough of that, that is far into the future, for now I am just pottering along doing a little research here and there when I get a chance.

As I was writing yesterday, I remembered the part about the radium - so I did a few google searches on it's introduction to Queensland back in the late 1920's early 30's. Searching through several pages my search had me stumble across the National Library Archive where they have digitised scans of old newspapers and translated text - dating back to the 1800's. Jackpot!

On a whim, I thought I'd enter my main characters name - partly because she had a newspaper clipping from the 1930's where she was featured during her hospital stay (I have sighted the original and also have copies of that article) and I wondered if perhaps that particular article had been digitised for prosperity. Unfortunately it hasn't yet. 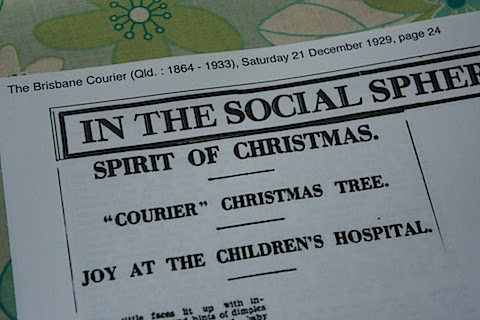 Two of these mentions would definitely HAVE to be my character because the years add up perfectly to the time she spent in hospital and her age was spot on. The third is debatable... while it could be her (same age / area) I can't be 100% sure as it's in a different context.

This discovery bought a tear to my eye because she was so proud of her newspaper article, reminding us constantly that she was so famous when to the best of my knowledge she had absolutely NO IDEA that she actually appeared in the Social Pages of The Brisbane Courier when she was a wee little girl. If only she was here so I could share my news. I am pretty excited about my discovery, it's put an oomph back in my step to keep working away at my research in the hopes of uncovering more.

I've read recently that sometimes when we write - it is ok not to know where it is going.
Maybe just plan your writing time and use an exercise to get down what comes to you.
You could do a bit of a timeline and then go back and fill it in.
I am by no means trained in this field this is just my opinion.
Good luck - keep persisting