{Bells in the Rain} A Visual Dare Prompt 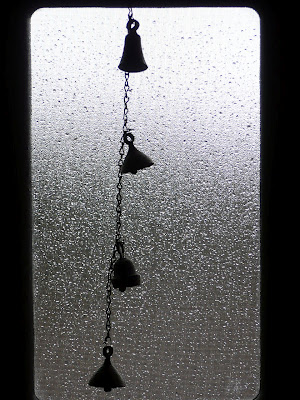 Like a dairy cow, she found herself pushed and herded, until she was pressed against the panel window. Staring out past the string of bells, now tinkling softly in the weather that was growing more intense by the minute. The squall had started up in earnest and small puffs of wind blew through the open doorway of the tram. Gusts tickled against her bare legs and she cursed herself for having forgotten her stockings today. Or perhaps she had deliberately not worn them. Imagining it was her inner vixen, trying to escape the ties of normal life. She grinned internally at such a silly thought amid such a serious situation. Suppressing the memory of the morning, her scattered thoughts turned inward once more as she watched the rivulets of water streak a pattern across the tram window. With so many people crammed inside the cabin, windows quickly steamed up. Her vision obscured by the rising cloudy mist.

Linking up with Anonymous Legacy with today's prompt. I have chosen to work this into my current work in progress which just happens to be part of my story for CampNaNoWriMo! It was interesting having a photo prompt to write to; rather than sit and write another instalment of the story like I have been doing in the past. Surprisingly it actually feels like it has given one of my characters depth that was previously lacking and though she is not the main character I am still working on the section of the book where her thoughts and life feature prominently. It was a actually a lot of fun getting to really know her today. Constructive Criticism welcomed!

I love how you've set up your hook without really giving away (yet) what the main conflict of this story is - whether it's her inner minx coming out, or the coming storm itself, or another danger entirely that will render both the bare legs and the storm irrelevant. Nice work! Thanks for participating!