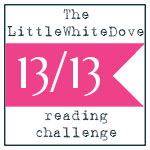 I had originally intended on reading James Patterson; "First to Die" for the Mystery genre of this challenge. However after some searching on KOBO earlier in the week I stumbled over this book instead and started reading it on Saturday.

As I found myself turning each page of this book, it soon felt like more of a psychological thriller than a mystery. Disappointed because I had also found a paperback version of the thriller book I intended to read, I put the call out on Facebook to my two favourite cohorts:

What would you classify as Mystery??? I started reading one that was listed as Mystery / Suspense over the weekend - but I think it would be more classed a Psychological Thriller. It seems to be a very thin line between the two genres - so what to do? Should I read an Agatha Christie or Sherlock Holmes. Any other suggestions welcomed

It would appear I was looking for a challenge to expand my reading further and yet no one called me on it. Sigh. I have however already downloaded Sherlock Holmes because it was free.
So I awaited a response and was soon met with some cheeky commentary {read Nancy Drew… honestly how much time does one think one has in her day} alongside a firm okay you can include it if you want. The voice of reason arrived back with the following:
It is a fine line. The one I classes as a mystery I did so because the main character had to work out what was going on, why things were happening as opposed to working out who had done a clear cut crime.
Working on that - I am including this one as my mystery because the Main Character has to work out what happened. And boy. Oh Boy. Should you read it? The twist at the end is not what one would expected. And that is all I'm saying. It had me turning pages until far too late last night (even had to resort to reading it on my iPad when my silly eReader went flat!) today I am tired, but I got closure!
My only negative is I believe the ending could have been wrapped up a little sooner. It sort of hit the climax (you know that point you wipe your forehead and go "woah, never saw that coming" then the book went on a while longer. From a writers perspective I can see why it had to be done this way and honestly I think the author handled it really well.
Posted by Car at 12:11 PM

Email ThisBlogThis!Share to TwitterShare to FacebookShare to Pinterest
Labels: Reading

The voice of reason?? Am I not reasonable? I SAID a Nancy Drew counted, and they are a damn sight shorter than Sherlock. Geez. Talk about hard to please...