One night last week I went to sleep and woke up some hours later freefalling into an absolute freak out. You see while it had occurred to me that my Writing Course was nearing the final date, I hadn’t really considered the logistics of managing three assignments in about 6 weeks. I was behind because of the School holidays – I had told myself I’d study at night – but I didn’t. The first week back I went for a coffee with the girls. FIVE HOURS LATER… I looked at my watch and realised I didn’t have enough time to get home before turning back for School Pick up. No study that day either. Add in end of financial year and all the deadlines that come with that for work & I was beginning to STRESS!

So with wasted days weighing down my guilty conscience, my mind began whirling in the dark hours in the middle of the night and I started panicking.

The pressure was building this week until I received a message from the College stating that although my Course ends in August – I have until September for the results to be issued. *phew* I was worried I’d have to have everything in 4 weeks BEFORE the end date to allow for marking.

So this week I submitted a screenplay. It probably wasn’t my best work and I’m not expecting great results on it as I realise that screenplay is an area that doesn’t interest me.

Yesterday I worked on my 2nd last assessment – structurally editing a chapter of my novel. It took me hours to go through and assess. I have 5 edited pages and a further 5 pages of notes waiting for me to weave them into a rewrite that is worthy. 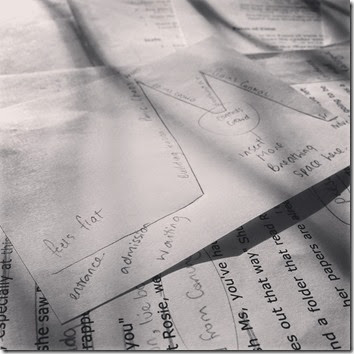 What I am most excited about though? After putting a cap on my inner-editor to write the initial words and spending the last two years thinking they were ordinary and that I was just wasting time because this story just isn’t worthy – I was really pleased to pull that editor out of hiding and be absolutely ruthless with my words.

I can’t explain it – but it feels that my bare bones of the story just needed me to “be aware” of the rules of writing and to look at it with fresh eyes, I feel this exercise has just allowed me to add the flesh and blood that was lacking in my original draft. Its a bit exciting, but I mustn’t get too far ahead of myself these five pages were only 1000 words. There’s another 60,000 waiting to be edited AND I am hoping to double the word count on the first draft. Guess whose gearing up to crack NaNoWriMo this November?