I want to be a writer.

I struggle to make it a priority in life. I seem to get my written pieces to a certain word count then I walk away. As each month ticks by I write less and less then a rush of motivation hits and I stare at them dumbfounded because I don't know where to start or where I was up to. The thought of reading 150+ pages just to see where the story was headed seems all too hard.

I put it away in a drawer and then in a few months time I get YET ANOTHER bright idea and I start writing feverishly and I think it's good, it is really good and then I either do too much & burn out or I start writing in small increments and lose the pace.

I am starting to think I am a serial starter and will NEVER EVER EVER finish a story. Which means I can no longer class myself as a writer can I?

Book 1 - Rosie Speaks; wrote 66K and put it aside because it lost pace.

Book 2 - Murder House & Other stories; wrote 14K and put it aside to attempt NaNoWriMo

Book 3 - Two Islands; wrote 50K and have only dabbled in backstories since an epic month

Book 4 - The Dodgy Uterus; wrote 18K before grief blindsided me. 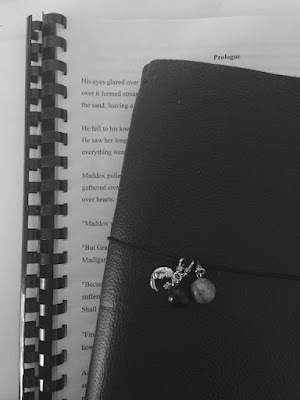 Today I set the printer running hot - 145 pages of my story printed and bound, I have decided to start charting the chapters / story arc in order to see where (if possible) this story could go.

I could go on and on about all the excuses in the world but quite simply I have Dory fever. Ooh look something shiny. My name's Dory. Ooh shiny new stuff. Hi My name's Dory. Over the weekend I decided enough was enough these stories won't write themselves and obviously I am not prioritising my writing nor am I doing a good job at prioritising other stuff too.

I am officially turning over a new leaf.
I hearby pledge:
- to write a little each day on any of my stories
- to not start any new stories until NOVEMBER
- to try and get one or two to editing stage.

I am writing it all here as part of accountability to myself and so that I can find a way back to a regular writing schedule.

June has been and gone. And it wasn't our finest month. In fact it teetered upon one of our worst.

It has been a whole month since I last wrote; with stars in my eyes and a fire burning in the pit of my belly, I was ready to hit the month and write like the crazy woman I am.

I started well. In fact I actually ended it REALLY well considering I fell far short of the recommended target count of 50K (but that is okay, I heeded my friend Kylie's words of encouragement to let the words flow as and when they were ready to come.)

I finished at 18,306 before I stopped writing completely. Actually for the past two weeks I have barely touched my computer - and I know this because the word document is still open and languishing at the bottom of my screen waiting for me to add more words.

Three events happened in the course of a fortnight that left me... dangling.

The first event was an anger so great it bubbled within and ended up causing an eruption that culminated in a major panic attack. Not pretty to experience (nor watch, my poor family) and the final straw that broke this camels back? Coffee! Or more to the point, not being able to decide if I wanted a coffee here, or go out for a takeaway. Of course it wasn't my beloved coffee that heralded the first streaks of that red hot anger - it was a phone call, a misunderstanding, receiving results and being cast adrift in the ocean of "what now?" The exact same feelings of drifting, lost, floating happened after my last operation, and it reared its ugly head with this one too.

Looking back the anger was a good thing. I needed a catalyst that would eventually reach the unshed tears and that it did.

The second event was of course the tears. From the day of my angry outburst tears bubbled beneath the surface. Occasionally they would spew forth in a howl, that would leave as quickly as it arrived. Some days I could feel them washing over my words as I choked out conversations. At that point my anger and my tears converged and it wasn't at all pretty.

This coincided with week 9 of recovery. I naively expected that since I didn't *feel* anything post hysterectomy that I obviously worked through my misgivings prior to the operation and that all would be fine. Turns out it wasn't and after reading similar stories of women losing their shit after 6 months and even 3 years post surgery - I knew I was in for the long haul of recovery - physically I was feeling fantastic, emotionally I was drowning.

I cannot thank my two best friends and husband enough for holding me up and getting me through that awful week. I still tear up thinking about it and though it is now behind me deep down I know I still have a long way to go.

This was the part where the story I was writing started to meander. The day of my angry outburst I wrote it all out and on the daily tally I have written "please rewrite this section when you aren't so angry!"  I wrote through days of tears and again each section needs a vast overhaul when it comes to looking at it with fresh (non teary) eyes. I seriously considered stopping, but I figured I do some of my best writing when it's raw and speckled with pain. So I kept writing. And writing. And writing.

The day I stopped writing the word document was open on the screen, I sat to write and the third event shattered me to my core and there were no words, not for my story nor my two blogs. The words instead channeled into my personal journals.

The third event was the loss of our beloved dog. In the space of 24 hours he went downhill and we said our goodbyes on June 16th. He was 16 years and 7 months and he wasn't just a pet. He was part of our family. Considering I was writing about coming to terms with how our *new* family looked now, his passing hit me like a tonne of bricks and I have been walking about these past two weeks completely and utterly lost.

No sooner did I finally start the grief process of losing my stupid uterus, then I lost our first baby (yes I know he was only a dog - but he was 8 before our only daughter finally arrived. He was and always will be what made up *our family*) back to back grief left me floating. Lost. Bewildered. I don't know where to start or how to finish or even if I can finish.

For now I am taking some much needed time, to rediscover ME beneath everything that has gone past. I am focussing on what small positives remain in what has been a truly crap-tactula year. I will write again but right now, I'm going to ground and I am allowing myself to feel and hopefully begin to heal this void within.

As for the half hearted (18K words!!!) attempt at Junowrimo - you can find it "wrapped in plastic" floating somewhere in between.
Posted by Car at 12:49 PM No comments: